From Héliski to the dreams… :

The chalet proposes you an helicopter services showing splendid air sightsof the PARADISKI. Landing and the out-tracks near the col du Petit Saint Bernard in Italy, will leave you unforgettable memories… One day of dream.

Vanoise Express consists of two cable cars that take you from the slopes of La Plagne (between Les Coches, 1548m, and Peisey , 1612 m) to the Arc slopes in 3 minutes 50 seconds. This cable car is the largest in the world, having two floors, with maximum capacity of 200 people and whose maximum speed is 45 km/h.

Paradiski is a unique experience : the slopes range from 1200 to 3250 m altitude.

THE SLOPES PARADISKI 425 Km of slopes

Two accessible glaciers and the largest and fastest double-level cableway in the world, the Vanoise Express, are only two of many arguments for a skiing holiday in the Paradiski skiing area. The “ski paradise” in the French Departement of Savoie in the Vanoise massif connects the winter sports areas of La Plagne and Les Arcs/Peisey-Vallandry to create one of the biggest and most diverse interconnected skiing areas worldwide.

The construction of the dual-level Vanoise Express in 2004 enabled the connection of the skiing area of Les of Arcs, from the Plan-Peisey station, with the neighbouring station of Montchavin in skiing area of La Plagne. Thanks to the very modern cableway, whose construction cost about 15 million euros, 2,000 people per hour can cross the Ponturin valley, a distance of 1,800 metres, in order to use the availability of both skiing areas. About 250 ski slopes with a total of more than 425 slope kilometres in every difficulty level are available to Paradiski vacationers. In the meantime, with a total of 157 lift installations, the infrastructure of the double skiing area was optimised in such a way that all of the slopes can be reached quickly and comfortably. Between the heights of 1,200 metres and 3,250 metres, more than 20 ski stations make up the Paradiski skiing area which includes all areas from the Aiguille Rouge (Les Arcs) up to the Dôme de Bellecôte (La Plagne). As well as this, both glaciers are equipped with a total of 626 snow cannons, making sure that snow is available during the entire season.

Landry, Peisey, Nancroix, Vallandry and Plan-Peisey are the 5 Savoyard villages which cultivate the Alpine art of living on the sunny slopes of the Arcs. 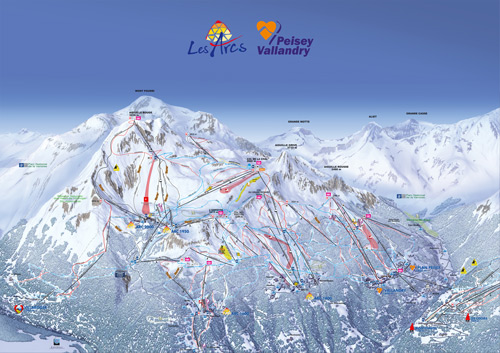